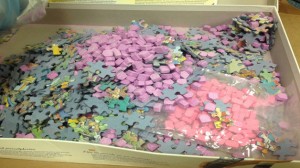 estimated value of $22,250. The puzzle box sent from the Netherlands, contained puzzle pieces mixed with over 1,000 pieces of the illegal party drug Ecstasy.

The intended receiver of the package was taken into custody on suspicion of possession of a controlled substance for sale charges. Detectives also found an additional 125 Ecstasy and 90 Xanax pills in the suspect’s apartment.

Ecstasy, or Molly/MDMA, is a psychoactive synthetic drug that alters mood and perception. Ecstasy gained popularity in nightclubs and raves, but is now reaching a broader range of users because of it’s ease of accessibility and low cost.

It is not uncommon for dealers to have large quantities of Ecstasy, for the sole purpose of distributing to the masses. A popular venue for the distribution are at concerts or multi-day music festivals, known as raves.

With the surge in popularity of Electronic Dance Music, or “EDM”, many venues are hosts to these multi-day festivals. Most venues are equipped with on hand medical staff to assist with emergencies, but many festival goers camp onsite, and are subject to being left unattended. Another major issue that arises are the sheer mass of crowds that attend these festivals. On site medical staff are only equipped to handle a few cases of medical emergencies, and with the ease of Ecstasy’s mass distribution some overdose cases may be overlooked, resulting in death.