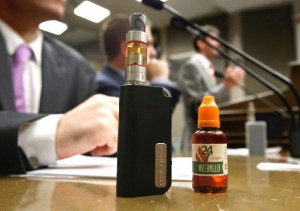 Earlier in May, the Department of Transportation announced the permanent banning of electronic cigarettes in checked baggage and the charging of the devices onboard an aircraft.

There have been recent incidents of devices catching fire during transport. Transportation Secretary Anthony Foxx stated that passengers may continue to carry e-cigarettes for personal use in carry-on baggage or on their person, but may not use them on flights.

“Fire hazards in flight are particularly dangerous,” Foxx said in a statement. “Banning e-cigarettes from checked bags is a prudent and important safety measure.”

An e-cigarette in a passenger’s checked bag in the cargo hold of an aircraft caused a fire forcing an evacuation of the plane at Boston’s Logan Airport. Another checked bag that arrived late and missed its connecting flight was found to be on fire in a baggage area at Los Angeles International Airport. The incident was blamed on an overheated e-cigarette inside the bag.

Due to the growing trend of users modifying and rebuilding their reusable e-cigarettes components, the government believes the danger has worsened. In March, the U.S. Transportation Department separately banned the use of electronic cigarettes on commercial flights.

On January 22, 2015, the Federal Aviation Administration issued a Safety Alert for Operators, which recommended that air carriers require their passengers to carry e-cigarettes and related devices exclusively in the cabin of the aircraft.

Congress banned all smoking on airline flights in 2000, and no U.S. airline allowed electronic cigarette use. The Department of Transportation stated that some charter flights may have allowed the use of electronic devices.