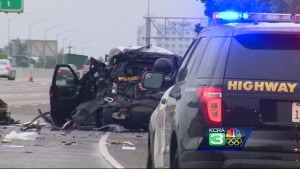 A FedEx truck driver who struck and seriously injured a California Highway Patrol officer in Sacramento has been arrested on suspicion of driving under the influence.

The CHP said Officer Vincent Smith, an 18-year veteran of the agency, remained hospitalized. The officer was trying to move two vehicles off the eastbound lanes of the highway near 15th Street after they had collided just after 3 a.m., the CHP said.

It’s the second major Sacramento crash involving a FedEx big rig in several months. In December, the driver of a FedEx tractor-trailer on southbound Interstate 5 lost control in rainy weather and the truck jumped the center divider, striking a northbound vehicle and killing its driver.

“FedEx Ground is committed to safety as our top priority and we hold anyone providing service on our behalf contractually responsible for operating safely and complying with the law. We are fully cooperating with investigating authorities and will take the appropriate action to address this matter,” FedEx spokesperson Davis Westrick said in a statement.