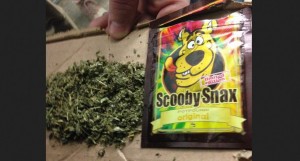 Some 8,000 Spice poisonings were reported in the US last year, which the Guardian calls “one of the drug’s most damaging years since its introduction to the United States almost a decade ago.” In one suspected case, a Mississippi man died after taking a single toke.

Indeed, potency is hard to predict and “the risk of overdosing is high,” reports the Las Cruces Sun-News, which explains that because Spice is typically sold (at gas stations, for instance) as “herbal incense” that is labeled as not for consumption, it’s out of the purview of the FDA and USDA.

Spice is a mix of herbs (shredded plant material) and manmade chemicals with mind-altering effects. It is often called “synthetic marijuana” or “fake weed” because some of the chemicals in it are similar to ones in marijuana; but its effects are sometimes very different from marijuana, and frequently much stronger.

Because the chemicals used in Spice have a high potential for abuse and no medical benefit, the Drug Enforcement Administration has made many of the active chemicals most frequently found in Spice illegal. However, the people who make these products try to avoid these laws by using different chemicals in their mixtures.

Spice is a new drug and research is only just beginning to measure how it affects the brain. What is known is that the chemicals found in Spice attach to the same nerve cell receptors as THC, the main mind-altering ingredient in marijuana. Some of the chemicals in Spice, however, attach to those receptors more strongly than THC, which could lead to a much stronger and more unpredictable effect.