Mr. James A. Greer Elected to National Board of Directors

April 12, 2016
(Orlando, FL) Accredited Drug Testing Inc. announced the election of Mr. James A. Greer, to a three-year term as 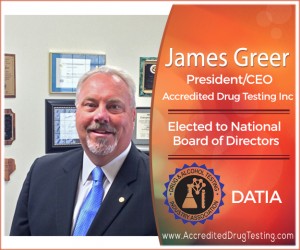 a member of the Drug and Alcohol

Philip Dubois, Drug and Alcohol Testing Industry Association (DATIA) Chairman, stated the following, “The Drug and Alcohol Testing Industry Association welcomes Jim Greer to our board of directors, and looks forward to utilizing his extensive experience both in business and government in achieving DATIA’s goals and objectives. As President of one of the nation’s leading providers in drug testing, Jim understands the issues and challenges our industry faces.”

Joseph Reilly, past DATIA Chairman and current board member also stated, “As the former Chairman of the Drug and Alcohol Testing Industry Association, and as a current board member, I am pleased that Jim has been elected to our national governing board. Jim’s experience as a successful businessman and elected official, along with his knowledge of the political process on the state and national level will be a great asset to achieving DATIA’s goals.”

Jim stated, “I’m honored to have been elected to the DATIA Board of Directors, and I look forward to working with the DATIA membership and staff in achieving the organization’s common goals.”

Jim Greer currently serves as a member of DATIA’s Legislative and Regulatory Committee and Marijuana Outreach Committee. From 1984 to 2007, Mr. Greer was Chairman/President of Regulatory Compliance Services Inc., a firm providing regulatory training to the nation’s hospitality industry with revenues exceeding $4 million annually. In addition to his professional experience, Mr. Greer has served as a Senior Political Advisor to various political campaigns, and has held elected office on the local, state and national levels. His community service includes; serving as President of his Rotary International Club, a member of the board of directors of the Chamber of Commerce and a volunteer with Helpful Hands Inc., a community charity program. Mr. Greer and his wife Lisa, have five children, Hunter, Amber, Austin, Aidan, and Hope.

Mr. Greer has received numerous awards and recognitions for his leadership and business success including: Business Person of the Year, Paul Harris Fellow Rotary International, and Inc. Magazine’s Entrepreneur of the Year. Mr. Greer holds a degree from Seminole State College and is a graduate of the Advanced Institute for Elected Officials. He also holds certification as a professional collector trainer (CPCT).